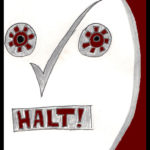 Alan Turing was a British mathematician and logician.  In the first half of the 20th century, he articulated a conceptual framework surrounding so-called “mechanical thinking devices”.  His ideas were entirely theoretical because no such devices existed.  Even so, many of his ideas remain at the foundation of theories of computation and the field of computer science. One … END_OF_DOCUMENT_TOKEN_TO_BE_REPLACED

If you are in recovery and interesting in writing coaching, contact Nancy.

This is a program that supports reading and discussion in libraries throughout the state of Idaho. It was suspended because of the pandemic, but if all goes well, these lively discussions will be returning to Idaho libraries in the fall.

I’ve served as a scholar for this program for I-don’t-know-how-many years. I have found every book, every library, every group of people to be interesting and stimulating. Every discussion brings new ideas and surprises.